Money is numbers and numbers never end. If it takes money to be happy, your search for happiness will never conclude. How many rich and famous people have to commit suicide before you realise no amount of money will ever bring you inner peace.

Money is just a bit of paper or nowadays polymer. People value it way too much. It’s the reason people do stupid shit just to get it.

Money can’t buy love is the biggest lie ever told in the age of capitalism. Money makes the world go around. The love of money is the source of love. Money is the difference between “I’m leaving you” and “I think we should work this out” ask the celebs who have been caught cheating and the woman has stayed.

Some of the best people I know haven’t had a lot of money and weren’t born into wealth. Not everyone has equal opportunities in this world. I ain’t judging people who do have 9-5 jobs, I got respect for them. I’m judging the system that says a human’s life is worth £10 an hour or 50k a year and that’s ridiculous. It took me until the age of 20 to realize I ain’t being a part of that system of chasing money for the sake of it. I am far from ‘broke’ but I don’t necessarily want to be rich (Even though it’s part of my name). I don’t care how much money someone has but at the end of the day, unfortunately, we live in a country/world that runs off money.
As we grow older, we slowly realize that wearing £300 or a £30 watch, they both tell the same time. Whether we carry £300 or a £3 wallet, the money inside is the same. Whether we drink a bottle of £300 champagne or £6 wine, the hangover is the same. Whether the house we live in is 300 or 3000 sqft, loneliness is the same. Whether you drive a £1000 banger or an £80,000 Benz, they both serve the same purpose. You will realize, your happiness doesn’t come from material things of this world. It comes from spending our short time here living and laughing with the ones we love. Stay humble, we all end up in the same sized hole in the ground.
As you probably can tell already from the blog, money doesn’t motivate me at all but everything I want to do and be with my life requires plenty of it. But then I realize, what I really want is freedom. In all sense of the word. But freedom requires money. I wonder why no one tells you that growing up. I feel like it’s impossible to be happy just chasing things that pay well. I think you just have to use whatever you’re doing to get to a place, that will make me happy.
We live in a “get money” culture. Once you get the money, what are you doing with it? People make a grand, post a grand, spend a grand. Acting like you don’t owe over a grand. It sounds like we all just faking for Instagram. If the money is not preparing and setting you, your future generations and your people up for our greatness. It’s being used for our destruction. As I believe people think it means that to avoid corruption in this world, you need money to pay your way out. Being rich, successful, and popular is what gives you a higher priority than everyone else.
The pursuit of money and even to some degree of success and entertainment themselves, distract from the suffering and systemic inequality that persist. At the same time, systemic inequality is part of that ‘make that money’ so enticing. You should want to become a millionaire not for the money but for the person you’ll have to become to earn a million pounds.
Money only impresses lazy women, when a woman works hard, a man with money is a bonus, not a ladder to upgrade.
The easiest way for a man to get women is to have money, That trumps being super cute, having a big deek or any other advantage a man may have had when it comes to women. Now that doesn’t mean broke men aren’t able to get those things from women. But even those men know that they would be more successful with women if they had more money. Now a man doesn’t have to be rich obviously but the higher a man’s annual income is the more resources he has to upgrade himself and his lifestyle. And for a lot of men that lack the intangibles that women are drawn to like swag, confidence, leadership, etc they can still get in the game if they have money to spend. Especially when they figure out that a large percentage of women equate sex with money and feel like they benefit financially from their interactions with men. Whether it’s a short term or long term arrangement. So from a male POV getting your money up even a little bit exponentially boasts his women’s success.
If money is what makes you respect someone fully then you’re a shit person. There are homeless people, I fully respect. They have taught me a lesson that no one else could have. You can’t have independence and want a man that’ll take care of you. These comments are scary. I understand, money provides security in that you can live at a place and eat but do not confuse it with real security in relationships. That’s the problem with some women, they equate the two. You have a dude that has loot but he fucks everything that moves. Where’s the security in that? Oh yes, because he has money. A huge mistake made by weak minds. The truth is a man or woman that has their shit together doesn’t need anybody to pay their bills and live their lives. So the only part of this that actually represented reality was the part about a woman being able to have a baby and that’s something men and women need each other for. 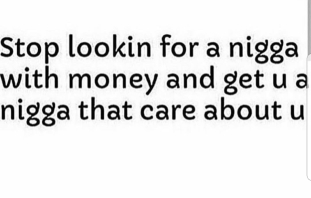 My only goal is to make enough £ to disappear for months whenever I want. I don’t want anything else, fuck a car, fuck a rollie, fuck the club, fuck being fly, fuck a big house.

You can’t take none of this material shit with you to your grave, protect your happiness. Money can only offer so much material comfort but there’s a space within us all that can’t be filled with plush woven fabrics and German cars. No matter how much we want it to. When you pass away, no one will remember you for the grades you achieved, the promotions you received, the cars and accessories you acquired, and your bank balance. They will remember you as a human being without the material items around you, or the money shown in the system, they will remember you for YOU.

I think a man is responsible for making sure that he and his family have their needs met and a lot of women don’t seem to know the difference between needs and wants. Nails, lashes, trips to the salon, etc are all luxuries. So the way most men view it is a woman should be able to take care of her own maintenance because if she can’t then she’s coming to the relationship as a financial burden. You won’t see a man ask a woman for a tenner to get a fresh trim every week, would you?
Anything a man gives a woman that isn’t a need should be voluntary. He shouldn’t have an additional dependent on his hands just because he’s in a relationship with you and a lot of women struggle to understand this simple concept. The reason I will marry an educated woman with career ambition was so that she could be a financial asset to our household, not a liability. A woman that makes a decent living has no problem establishing a budget in what kind of maintenance and upkeep she can afford. Of course, they are men that do pay for all kinds of stuff for women but I think those are usually rich or drug dealers so the money isn’t really important to them. Or they’re men that have to market themselves that way because they would be unsuccessful with the women they like otherwise. If a woman is only with a man for financial aid/gain, there is a word for her. Women that say they can’t eff with a broke man, need to realize if they can’t do for themselves, they’re the ones that are broke and their values are screwed up. If she can pay her own bills and don’t need a man, then having a man shouldn’t mean he has to pay her bills.
One thing I’ve always hated about money advice? Asking me to invest in stocks, mutual funds, and insurance with the money I don’t have. The second thing I hate? When you can’t tell me how and it works for you. The number one thing we as black people need to learn is simply how to deal with money. Negotiate what we need and how to make our money stretch and continue to work for us. Mindset is the first step. The strategy is 2nd. With both of these, you CAN get to the point where you have the money to cover all your necessities. Then focus on getting what you want. I’m a big advocate of those who practices what they preach and I don’t recommend people do what you want. But the ability to buy what you want, all by having the nerve to stick to a simple plan. Experience and taking chances are excellent teachers but many times, it’s also the hardest way to do things. You don’t have to do the same. 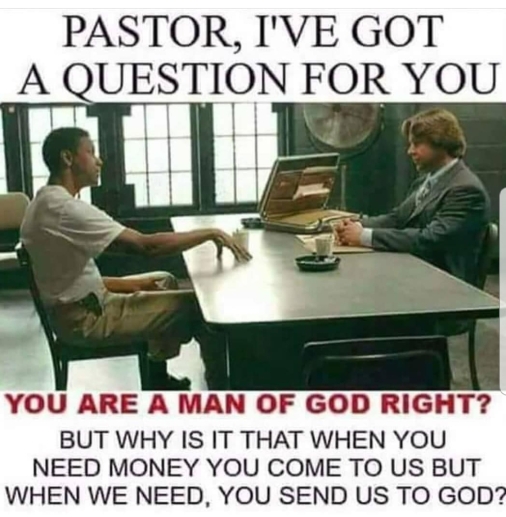